Last week, TXF held its first Short-Term Trade & Supply Chain Finance event in Munich – and a humdinger of an event it was too. I learned masses of stuff - and I’m sure the same can be said for many others attending.

Rockin’ in Munchen
Last week, TXF held its first Short-Term Trade & Supply Chain Finance event in Munich – and a humdinger of an event it was too. I learned masses of stuff - and I’m sure the same can be said for many others attending. Coming only one week after we held our ECA Finance event in Paris, we are delighted that we remembered which city we were in, and what the product lines were. Anyway, jesting aside, there was a particularly good mix of delegates, excellent presentations, panels and workshops and a lot of new ground was covered. With the response we’ve had, we are already planning the repeat event for 2014. Check out what you may have missed with the event photographs (TXF News 29 November).

While in Munich, Enrico Camerinelli, senior analyst at Aite Group also introduced an electronic trade finance survey he is conducting in association with TXF. Let us know if you would like to take part in this survey – responses to which will be anonymous of course – and we can email you further detail and the related form.

We also took a straw poll in relation to greater automation within the trade while in Munich – and theresults of this can be found on our website (TXF News 29 November).

Different strokes for different folks
On the commodity frontline, commodity trader Trafigura – the world’s second biggest metals trader no less, and the third largest oil trader by volume – raised €500 million ($676 million) through a bond issue. While in another move, Trafi sold a $500 million 10% shareholding in its subsidiary Puma Energy to Angolan oil company Sonangol. Trafi now holds 49% in Puma, and Sonangol 30%.

Back in with the traders and Mercuria Energy signed its $1 billion Asian revolver with some 47 banks in total participating in the facilities. With a lot of hungry banks around, naturally the loan was heavily oversubscribed with Mercuria cutting back to only take $1 billion of what was available (TXF News 26 November).

Elsewhere, the power and influence of Russian state-owned banks can be seen with metals and mining company Mechel receiving the first $150 million trancheof the funds for its first stage development of the Elga Coal project from Vnesheconombank (TXF 28 November).

Something good
The project finance world has been somewhat starved of mining finance deals over the past year – or is that two or three years? Anyway, something good happened last week with the details being announced on the finalisation of the financing for the Chilean Antucoya copper mine. See TXF News 25 November for full details of the financing including final bank allotments.

The Antucoya copper project is being pushed along by Marubeni which will ultimately offtake 30% of the copper produced, and Chile’s Antofagasta. The overall project has a projected cost of $1.9 billion, wth the debt portion making up $650 million of that. Japan’s JBIC and Canada’s EDC are putting in direct funds. German engineering company Takraf is providing much of the equipment and construction services.

In another capital equipment financing transaction,Standard Chartered signed a S$45 million ($35.8 million) debt facility for Singapore’s Envirotech Water for a water treatment plant in China (TXF News 28 November). The deal is not backed by any ECA.

And within the ECA sector, US Ex-Im has assisted another US sale of wind power generators with a $61.1 million direct loan to Orosi in Costa Rica for the supply of turbines from Gamesa of the US (TXF News 27 November).

Moving on up
On the personnel treadmill of trade finance, HSBC made a range of promotions in Asia-Pacific within its commercial banking team, appointing six people to new positions as it strengthens its offering throughout the region (TXF News 26 November).

As I also mentioned in the previous round-up we spoke to Gilles Sayer to find out more about his move from Credit Agricole to Essar Trading group (TXF News 29 November).

And in the legal world, Watson, Farley & Williams has appointed a new partner with Joe Levin joining from Wragge & Co. He specialises in energy and infrastructure (TXF News 26 November).

The winner
Those of you who read through to the end last week – will know that I set a music teaser, probably more to keep myself amused than anything else. I was inundated with responses – not all direct – but hey, there were some really good answers. The answer was Brass in Pocket by the Pretenders – a great song, by the marvellous Chrissie Hynde. And I have great pleasure in announcing that the winner is David Kempton, managing director, loan syndicate & distribution Asia, at Standard Chartered in Singapore. David came in a rapid two minutes before Siva Pillay at Ocean Partners in London. So, in an extraordinarily generous gesture I decided to give both guys a nice uncirculated $100 trillion Zimbabwean banknote circa 2008 – the largest denominated banknote ever, anywhere. Those banknotes are winging there way to you via snail-mail. Congratulations you chaps – don’t spend it all at once!

And finally.………
Glad to have the US back with us following Thanksgiving and massive helpings of turkey and gravy, and grits - mmm. Compared to us wimps in Europe who get endless public holidays  - ok, I know, not all of us take them – our poor hard-done by cousins in the US get very little in comparison. For this, we salute you and those 100 million or so turkeys that bit the bullet last week!

Have a great rest of your week. 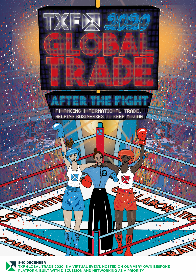