Export finance in a nutshell

The world’s economies are increasingly interlinked, and so growing companies and governments often decide to import equipment or machinery from a different country to improve their productive capacity or efficiency. These importers can range from a small textiles manufacturer to a big energy producer or a major government ministry. As with any investment, buyers can choose to finance these purchases either to conserve their cash flow, or because the investment is too large for them to fund from internal sources.

Financing these purchases might be difficult for a number of reasons:

The buyer is located in a country that is politically unstable

These issues might prevent a buyer from being able to finance that purchase, so almost every major exporting country has put mechanisms in place to try to mitigate these issues, and make lenders and exporters comfortable, so that a purchase can take place, and those exports can contribute to increased employment in the exporting country.

The main mechanisms governments use are export credit agencies (ECAs). These can be a government department (as in the UK and the USA, for example), a company in which the government is the majority shareholder (eg Spain) or private companies that manage these risks on behalf of the government (eg Germany or the Netherlands).

ECAs typically issue lenders with insurance policies, with the buyer paying a fee to the ECA to insure a loan linked to a supply contract, and the lender/s getting reimbursed by the ECA if the borrower is unwilling or unable to make repayments under that loan. ECAs do not cover 100% of any loan, leaving a residual risk with the lender/s of around 1-5%.

TXF considers a transaction an export financing if all or part of that transaction features at least one ECA.

The availability and cost of financing can be so important to a buyer that in some instances they will consider purchasing from a country depending more on the attached ECA support than on the actual price of the exported goods. This could encourage larger countries with healthier finances to engage in anti-competitive behaviour by offering lower-cost debt or more generous terms and conditions.

As a result, a majority of ECAs agreed to follow rules set by the Organisation for Economic Cooperation and Development (OECD). In this agreement there are rules on minimum fees and maximum debt maturities that together promote a level playing field for all participating countries.

With reference to the OECD agreement, it should be possible to calculate, for example, the minimum fee that a borrower would pay to insure an export credit, and even the interest rate of the loan, in certain instances.

In the first section above we discussed the basics of ECA finance, but ECAs can help promote exports in more than one way. There are several products that ECAs typically use:

This is the solution described above, under which ECAs insure a credit or loan used to pay for goods supplied by exporters.

If an exporter receives a particularly large order it may itself need to borrow to make the investments in raw materials, staff and equipment necessary to fulfil that order. This product gives exporters access to liquidity to enable them to take on contracts.

In some cases ECAs prefer to lend the money themselves rather than rely on banks. In that case the ECA takes on all the credit risk associated with a borrower. Most ECAs prefer not to take this risk, but sometimes find it to be more cost effective, for instance when making smaller loans to smaller customers. They may also be forced to step in when a general liquidity crisis prevents banks from making any loans at all, regardless of the cover they carry, as happened in the 2008 financial crisis.

This product is sometimes referred to as a performance bond. It is a guarantee issued on behalf of an exporter specifying compensation to the customer if the exporter does not honour all or part of its contract.

There are other products that some ECAs offer in addition to this, but they tend to be adaptations of the four products listed above.

Buyer credits are the products most frequently used by buyers looking for long-term financing - and feature the most complex financial structures, in terms of the number of parties involved. These transactions go through a process that can take as long as 2 years to reach financial close. The main steps are as follows:

In this stage the borrower or buyer tests the market’s appetite for the deal, normally with the help of a financial advisor. This process can be very formal and linear, as in the illustration above, and the borrower looks for legal representation and then for a financial advisor. Sometimes the borrower already has a relationship with a financial advisor and this process does not happen at all. Some exporters may even have a team in place to assist customers with financing. Once the financial advisor is appointed, it will prepare some basic information on the desired financing to present to ECAs, so they have a sense of the terms and conditions of the deal. In this stage a deal could be considered too risky, or even not risky enough to require ECA involvement. In those instances there is no need for credit insurance at all, because banks are comfortable with the risk and the extra cost of the insurance does not make sense.

This process can take up to 3 months. 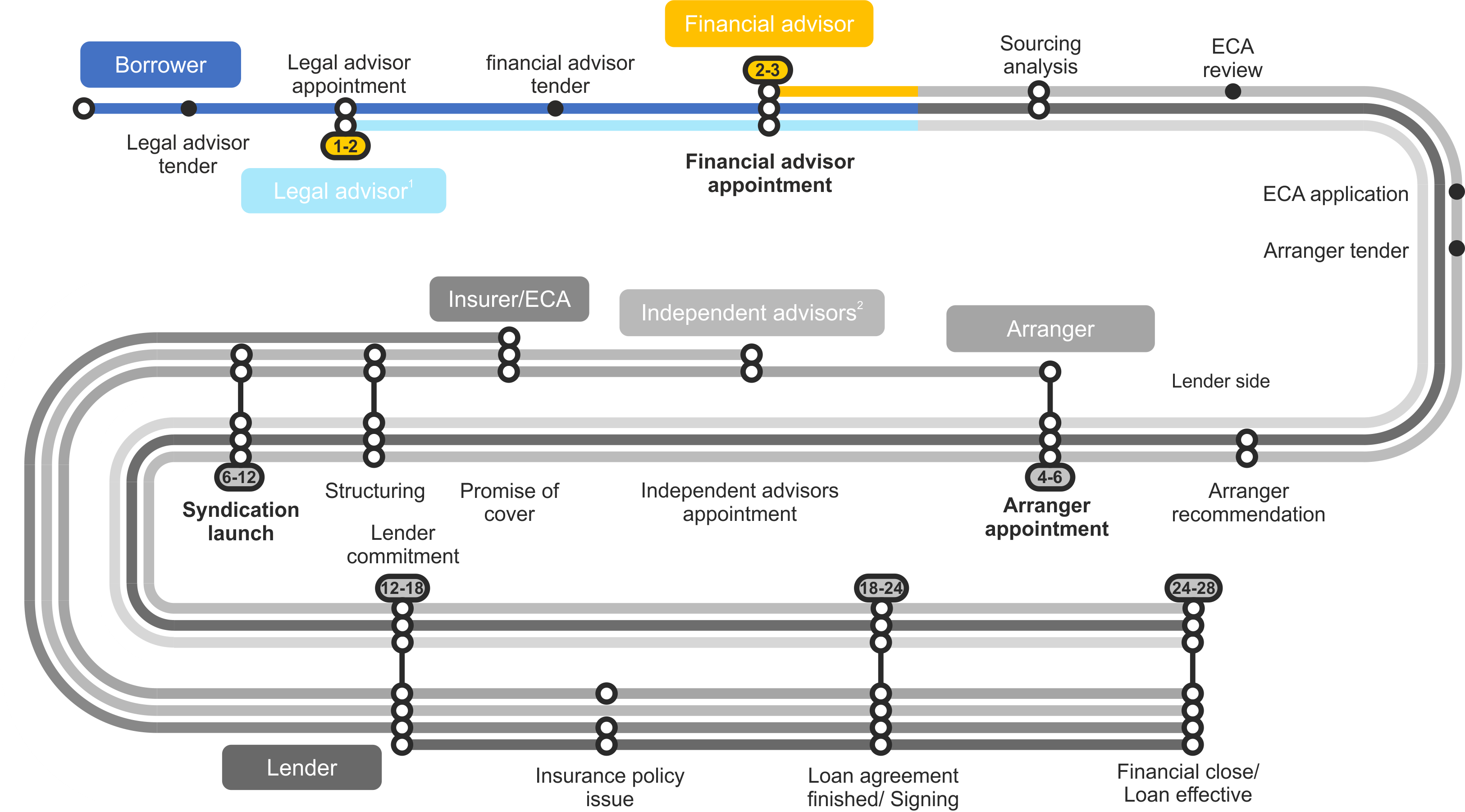 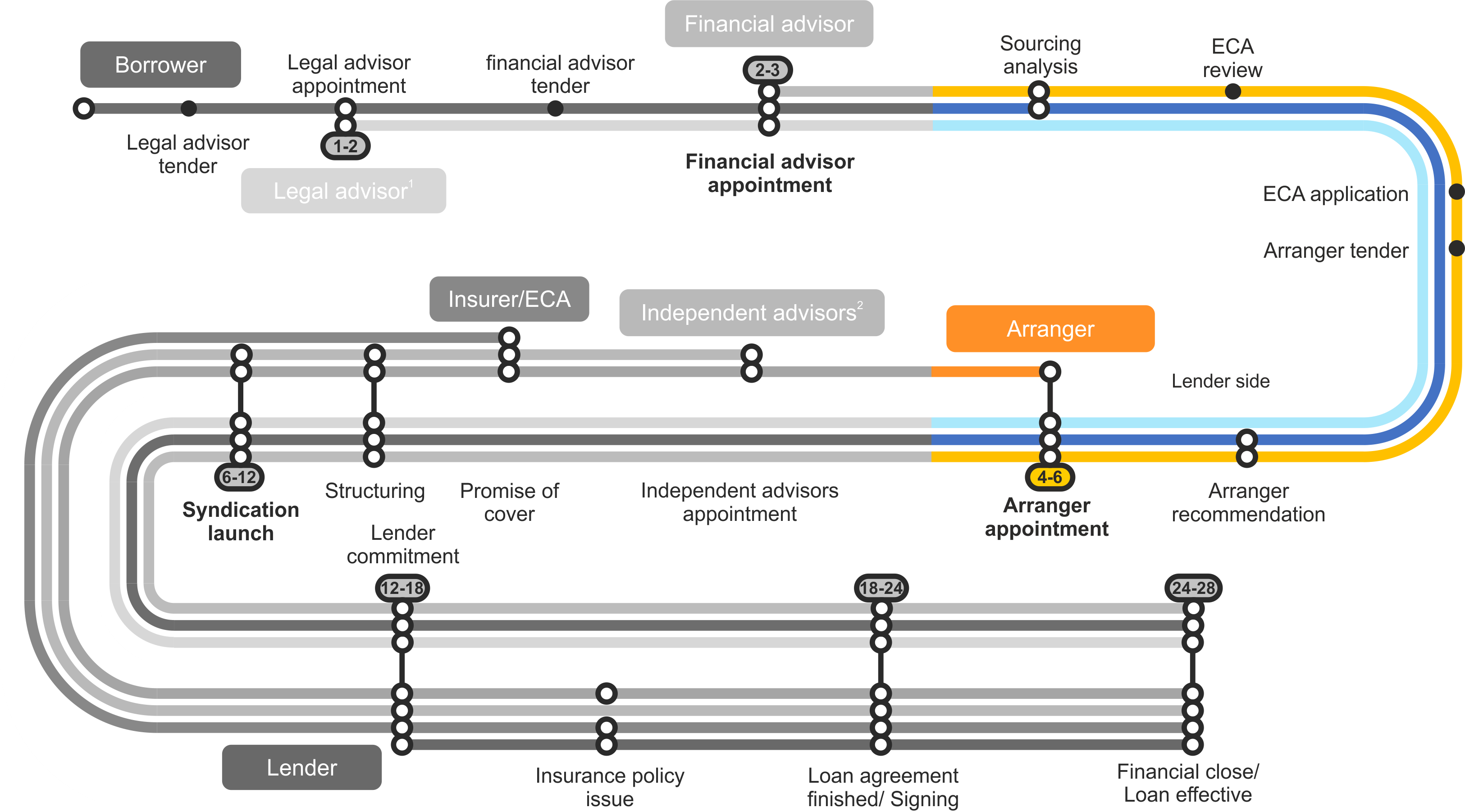 The arranger then assembles a transaction by drawing on the expertise of advisors on different aspects of the deal (legal, environmental, technica, and so on) and finding additional lenders if necessary to provide some of the transaction’s debt requirement. This process - of making all parties comfortable with the financing terms - involves a lot of administration and coordination. In this process lender/s, guarantor, buyer and seller may each give official notice that it is committing to the deal. For instance ECAs will issue promises of cover, and lenders may issue a commitment letter until all parties are ready to sign the loan agreement. This can take as long as 24 months on complex deals where multiple ECAs and lenders are involved. 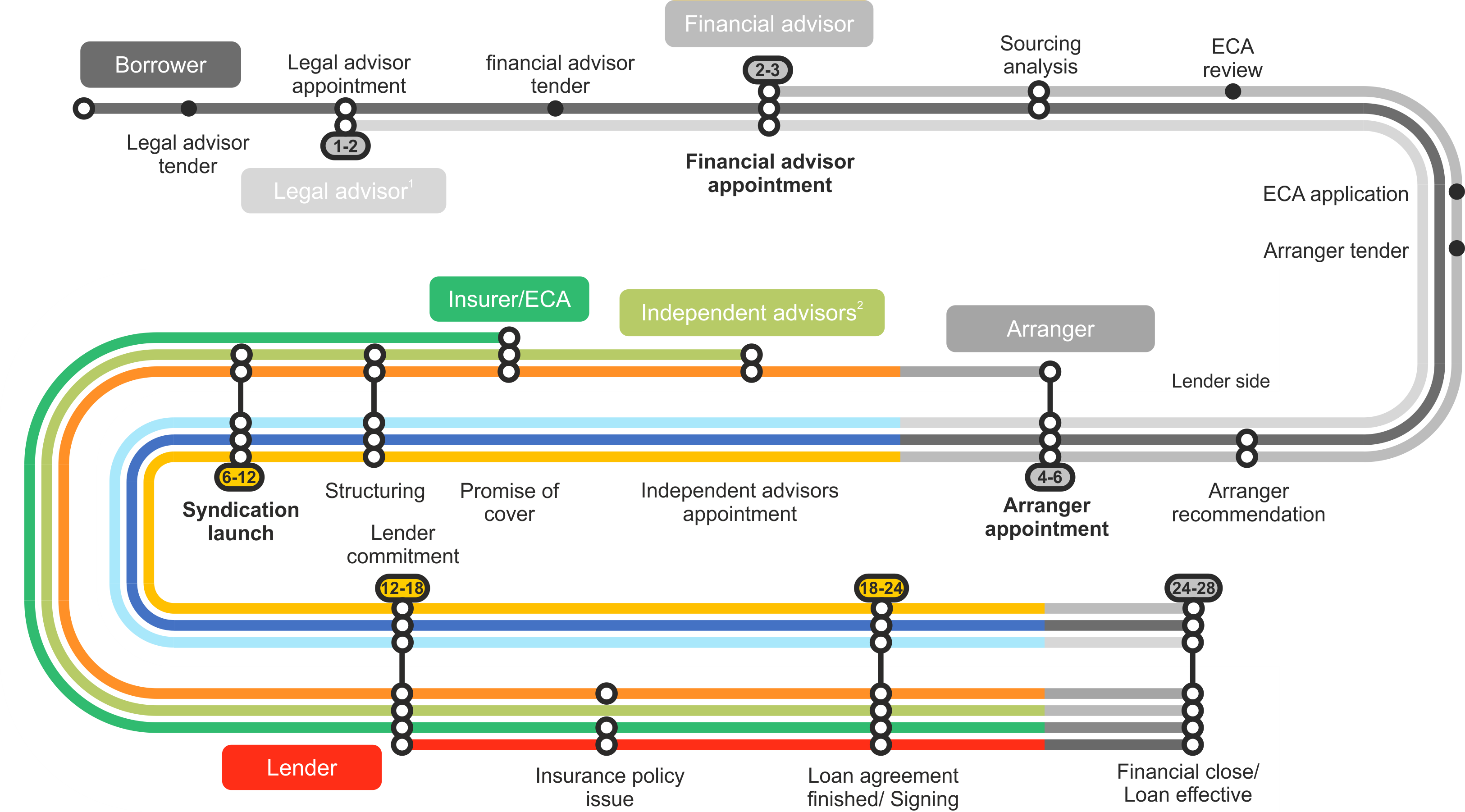 4. Draw down, repayment and monitoring

After this lengthy process culminates in the signing of loan documents, the borrower has access to the funds needed to make the purchase of the equipment, but the loan agreement does not become effective until the borrower draws at least part of the funds. The life of the loan consists of two parts: 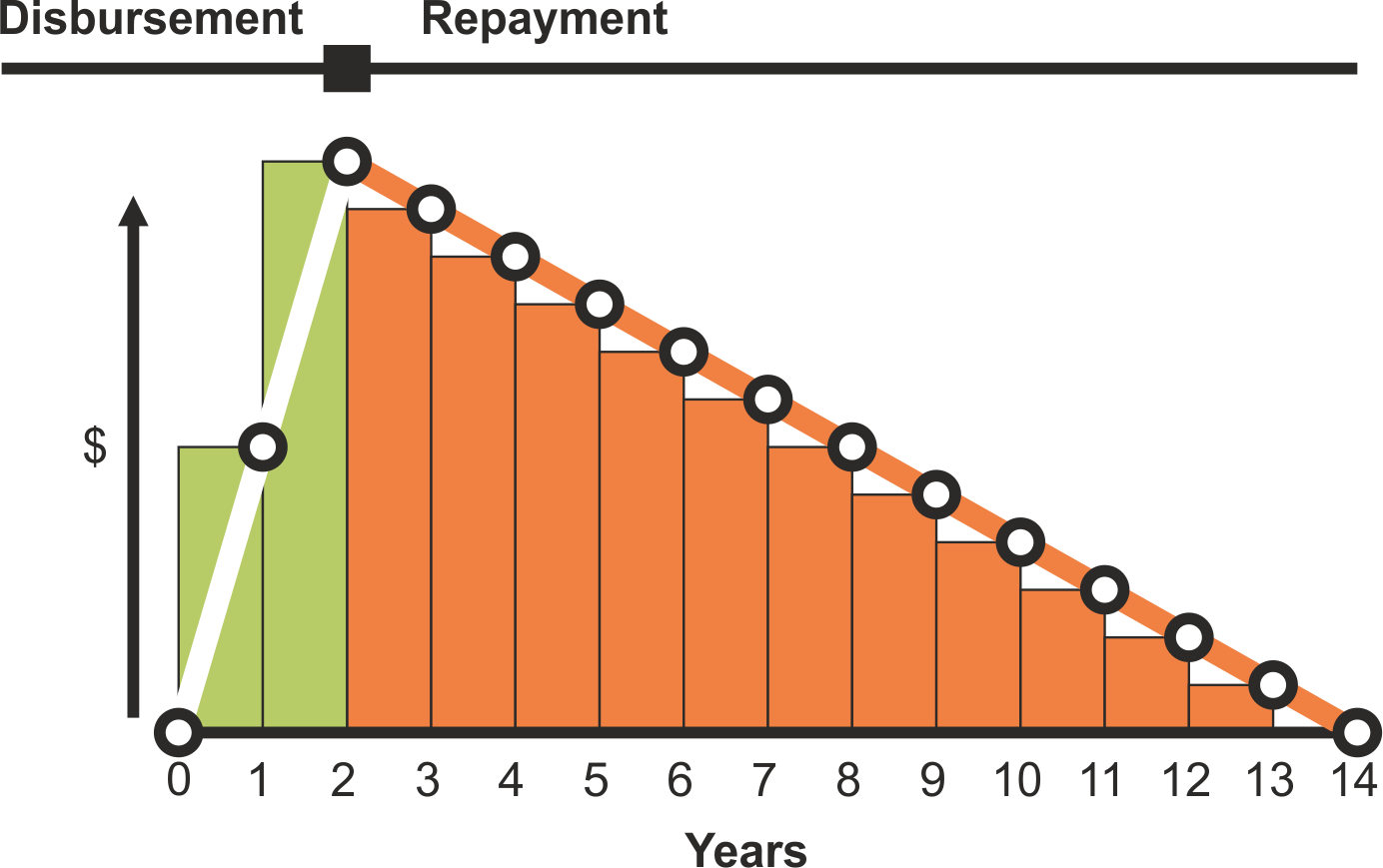 The loan timeline can be simplified and represented as follows:

The loan timeline can be simplified and represented as the chart you can see on the right, where we have 2 years of disbursement and 12 of repayment. Green represents funds going from the lender to the borrower and red the opposite.

Types of recourse and structuring

In finance there are three basic ways that a deal can be structured in terms of the rights of the lenders over the assets of the borrower:

Lenders only have the right to repossess the assets covered by the loan agreement, and do not benefit from any other support from the purchaser’s corporate parent or its shareholder/s

Lenders may benefit from some support from the borrower’s parent or shareholders, in terms of guarantees of some obligations, or its support is time-limited (say until the asset enters operations).

The borrower may be the corporate parent, or the borrower benefits from full guarantees from a corporate parent or related company, and lenders benefit from an unconditional obligation to repay the loan (and sometimes security over their assets) until the debt is paid in full

Export finance also uses these different types of recourse depending on the nature of the asset, and normally deals are structured so they are:

Very often an export finance transaction can be too large for a single lender or even an ECA to feel comfortable assuming all of the risk. Different bank lenders in export finance have widely different limits on their participation in deals, but a reasonable average would be between $100m and $150m.

ECAs have even more widely different transaction limits, and these may vary by borrower and/or host country. Another likely scenario is where a purchaser decides to source its equipment from more than one country, meaning that more than one ECA is involved. Different lenders and in particular ECAs will attach different sets of terms and conditions or maturities on loans. As a result transactions are frequently divided into different tranches.

These tranches will typically each have its own set of conditions, currency, maturity or pricing, and their own lending groups, and usually a single ECA as primary guarantor. In export finance tranches allow lenders to choose which ECA they are most interested in lending under or alongside. It is very common for lenders, particularly the larger ones, to participate in multiple or all tranches, though it is also common for banks to participate in just one tranche.

A common terms agreement will usually govern relationships between a transaction’s different tranches’ lenders. In conventional finance, a tranche may also denote claims over assets or revenues of different priorities (i.e. who gets paid first, and who can foreclose over particular assets), but this is not necessarily the case in export finance.

If you visit TXF Intelligence’s database there are plenty of examples, but a tranche breakdown would typically look as follows: 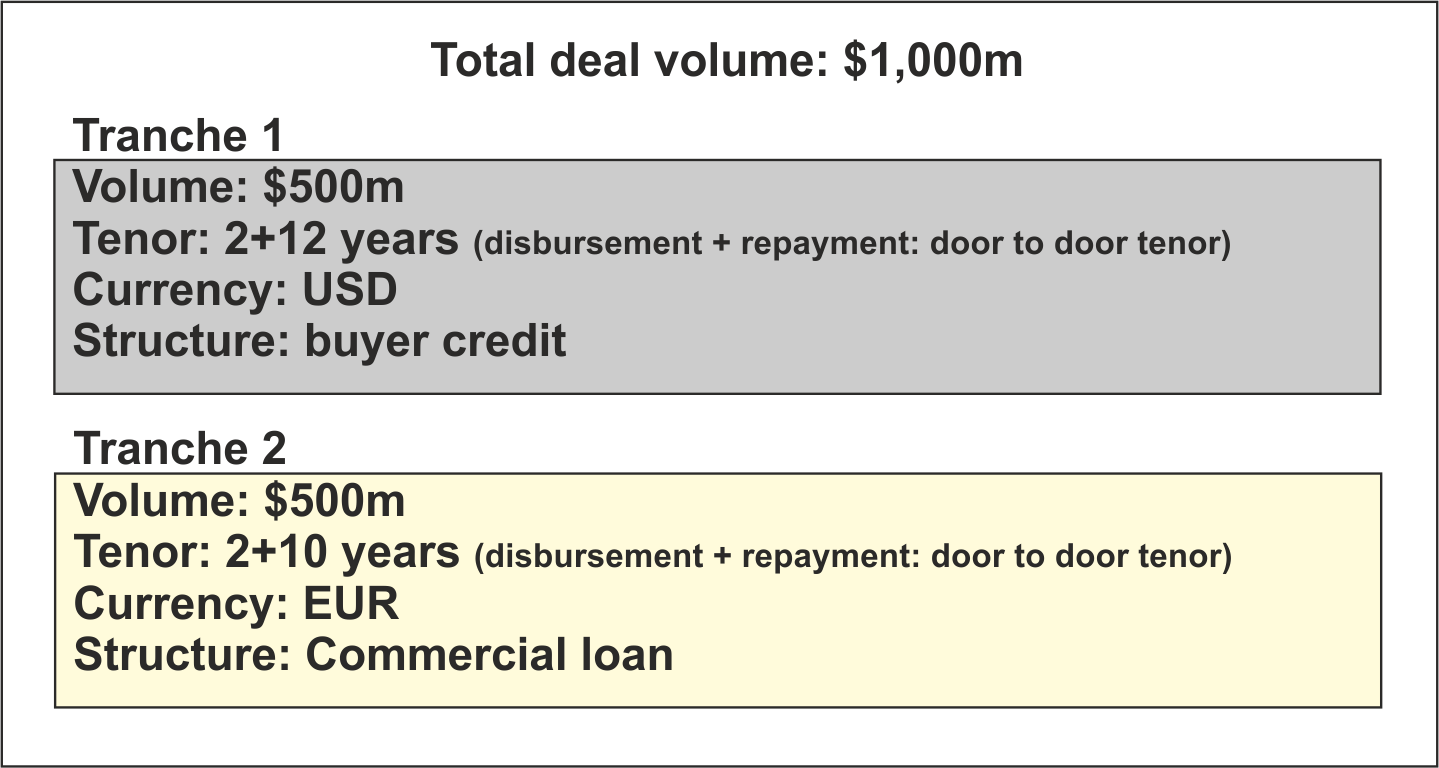 Founded in 2013, TXF is a specialist B2B market intelligence provider in the trade, export, commodity and project finance sectors.

View our upcoming events or find out more about a TXF Intelligence subscription by clicking on the buttons below: