Stages for change: ‘Small tickets are important, but hardly anybody gives them credit’

In this week’s edition of the Stages for Change interview series, Sabine Vigneron and Angie Dorschel discuss the power of coincidence, working together to champion small ticket financings, and the role that digitalisation will play in the future of export finance

In export finance, your network is everything. Deals are originated through the contacts you make, and a random meeting in the corridor can mean everything for career progression.

The Stages for Change initiative was designed to help women build strong networks in the industry, ensuring that a broader range of people are in the rooms where deals are made. We want to celebrate female talent and encourage women to uplift each other in the workplace, offering each other seats at the table where they may have previously been overlooked.

In this week’s interview, I spoke with two women who are doing exactly that. AKA Bank’s Sabine Vigneron and Angie Dorschel first met in a corridor, and after working together in different teams on several deals, they joined forces to direct the bank’s digital platform, SmaTiX.

SmaTiX is designed to make the exporter’s life easier when it comes to financing small ticket transactions: it streamlines processes and speeds up deal execution. It has simplified buyer’s credits for smaller deals (between EUR or USD1-10 million) and, so the team hopes, could pave the way for smoother digital processes on larger transactions as well.

Sabine and Angie filled me in on how they started out in export finance, why they work so well together, and how they envision the future of this ind 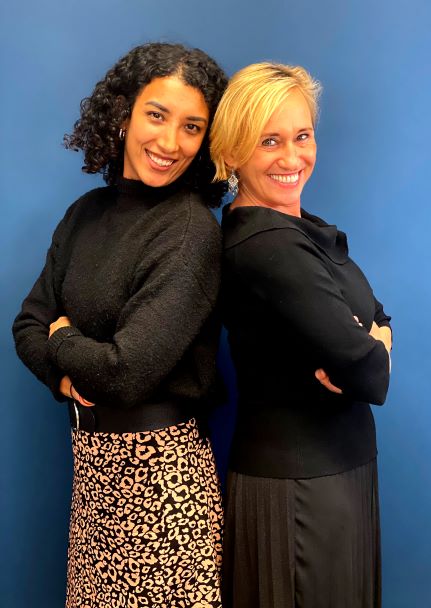 Eavie: Can each of you tell us a bit more about how you came to work in export finance?

Sabine: It was by sheer accident! I was working in the marketing team at Bank of New York and one of my colleagues introduced me after work to a friend who was working in export finance and looking to expand his team. When asked if I could see myself pursuing export finance, I said yeah, why not? They were looking for someone; he thought I was capable and that I would fit the team – so I tried it. That’s how my journey through export finance started many years ago.

Eavie: Angie, how about you?

Angie: My story is also an accident. I was working at an asset management company in controlling as a student job, but I realised that it was not the job I wanted to do. Since the beginning of my studies, I was more interested in working for a bank. As I started looking for a job working at KfW but during my search I found AKA.

I started as a student, worked my way through, and I’m still here and I love it!

Eavie: How did you two meet and how do you work together at the moment?

Sabine: When I joined AKA in 2018, they were starting the pilot phase of SmaTiX. That summer, my former boss at NorthStar Luxembourg bumped into me in Frankfurt – accidentally again, because that’s how it happens in the banking world. He said, ‘you’ve done small ticket export finance before, would you like to strengthen our SmaTiX team?’ He had recently joined AKA as head of export finance, and in the SmaTiX team they had two guys on the technical side, but they needed somebody who has done transactions. It was perfect timing!

I was helping to build up the SmaTiX platform, and at that time Angie was in portfolio management. We worked on the same floor together on my first SmaTiX deal in Azerbaijan, for which she was my portfolio manager.

Angie: It was funny because we started working together but on different sides – she was in front office and I was in back office.

I stayed in my back office role in portfolio management for two years. I am quite outgoing, and therefore I thought it was time to have a look at a front office role and to experience close contact with clients. I already knew a lot about the side I was working on, and therefore it was now time to learn about the other side.

The small tickets team were looking for somebody, and although I was thinking about going into bigger projects, I realised I like the small transactions. And then I ended up in the team with Sabine.

Sabine (laughing): I think you wanted to make sure that everything SmaTiX was procuring and passing on to portfolio management was being done properly!

It’s brilliant because she has seen both sides of the deal and she knows what is important in portfolio management. On our side, it’s marketing, client relationships, and positivity. But you also have to bear a couple of things in mind about the administrative handling of the deal. And that’s what makes Angie a perfect fit for us.

Angie: It’s nice to work together because I understand the back office, and Sabine has a lot of experience in building relationships with clients and managing transactions.

Sabine: It’s really cross-fertilization because I’ve seen so many transactions over the last 20 years, which means I’ve also seen what can go wrong when deals go sour. Banking is a people business, but it also can involve a lot of teaching, and you have to do it as early as possible - especially with clients who have never done export finance before. Angie and I make a great team because we complement each other.

Eavie: Are there any other ways in which you work well together?

Angie: Everyone is unique and everyone has different personalities, which means each person brings different ideas. I know the other side, so I know what they are expecting from us in the front office.

Sabine: I have the experience in negotiating externally, and Angie knows why things need to be done a certain way internally. I think we’ve come a long way with portfolio management because they didn’t have the experience with small ticket financing before.

The idea with SmaTiX was to be as smooth, easy and fast as possible – it was supposed to be a fast-track system for tiny transactions. I think it’s great to have Angie ‘translate’ this into portfolio management – telling them why we want to do things differently, sometimes completely opposite to how they’ve always worked.

You have much more steering power on smaller transactions where you’re structuring the deal by yourself, than on big transactions with four or five banks where AKA is just one participant.

Eavie: Both of you fell into export finance by accident. What was it that attracted you to working in the small ticket area once you found the industry?

Angie: I actually wanted to go into the big tickets at first, but from working on SmaTiX, I learned that small tickets are actually very important; nobody gives them credit. You’ve heard a lot about big projects like wind plants in Chile, but you don’t hear about the work that has to go on behind that. You will need transporters to work on that wind farm, and we are financing these small deals.

Sabine: We can do effectively more for the people in the importer’s country. Obviously power plants and telecommunications are important on a big scale, but we’re working on projects that are right down to earth – food production, cranes for unloading equipment, the trucks that collect garbage, simple things which have a big impact on people’s daily life and social wellbeing.

Eavie: Well, you can’t do those bigger projects without all those little building blocks in place!

Angie: Exactly, it’s a symbiosis: without the small ticket projects, you won’t be able to do the big ticket ones.

We also have the chance to set the path for the bigger transactions through digitisation. It’s great to be here at the start, and in a few years’ time I hope that we see this efficiency rolled out for the bigger projects.

Sabine: For me, having worked on really large transactions as well, I do like the faster turnover. You see your results – successes and failures – much faster. Of course, during the pandemic even the times for negotiating small projects have grown to several months because the buyers possibly need to rethink their investments, but pre-Covid we could do things much faster.

In 2019 – the first full year that SmaTiX was alive and kicking – it was really great to see that you can get the financing request and the LOI at the press of a button. You don’t have a lot of negotiation on the loan agreement because it’s all standardised, which is what makes SmaTiX fly in the first place. You sign it, you disperse it, and there you go! You’re ready to start working on the next one.

As Angie said, digitisation is the way to go because it facilitates these processes. A lot of big banks have heavy procedures, which aren’t really fit for small ticket deals. AKA set the path for small transactions – and we hope that this is where financing is heading. You set the standard form, and for standard deals of 20-50 million with one exporter and one ECA, why not use digitisation? Yes, for bigger deals with multiple parties you will always need more time to negotiate, but we can really set the way with small tickets.

It was about time for us to find a solution that helps both the exporter and the importer. It’s not just giving the borrower the opportunity to get long-term financing at attractive rates. We also want to help the exporter who’s got quasi-cash conditions because he’s paid on delivery – now, he doesn’t have to worry about it. He doesn’t have to do the due diligence and monitor the deal as you would have to with a supplier credit. He doesn’t have to take it on his own books or worry about how he’s going to sell it off to the secondary market afterwards.

Angie: And he doesn’t have to do a lot – we do all the management work and we take the risk.

Eavie: With all this in mind, what do you hope that the future of export finance looks like?

Angie: I hope that export finance will become more digital, and more standardised so that it’s easier to get things done. Even with the small tickets, the idea was to help exporters and importers get smoother buyer credit. There are small obstacles in the way at the moment, for example you have to wait a long time for ECA cover. Lots of parties say they have digital processes, so you expect things to be digital end-to-end, but actually it’s not like this.

Sabine: But it’s slowly changing, and that’s the good thing

Angie: Yes, and we are now able to improve digitalisation with SmaTiX. We are thinking about how to have a process which is completely digital from end to end. That includes KYC and creating a profile for exporters. So I hope for more digitalisation, and I hope that we are the ones who set the path. I want people to recognise that AKA started with the small tickets and created smoother, digital export finance.

Sabine: Digitalisation will come, and I’m sure it will be the way forward. In the beginning, SmaTiX only digitised the financing requests – well now we have digitised KYC and a digitised credit application process. We are on our way to getting AI to recognise our documents so that the disbursement process can be digital too.

Digital is the way forward, and where better to test it than on small ticket transactions

You can connect with Sabine on LinkedIn here, and with Angie here