Last week's announcement that China plans to impose tariffs on up to $60 billion worth of US goods points to a heating up of the trade war between the two countries. Jonathan Bell takes a closer look at the worsening situation and The Week That Was... 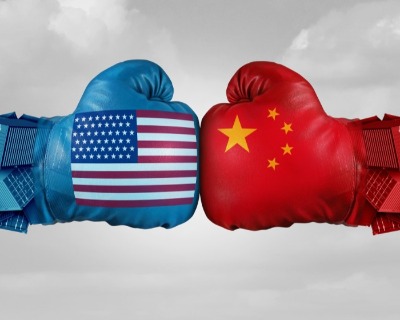 China and the US – disturbing noises last week from both sides point to a heating up of the trade war. And it would appear that formal trade discussions have ceased for now between the two sides (the last such talks taking place in early June), adding to the fears that the tit-for-tat tariffs scenario will continue and move on into other areas where China will need to consider other options beyond the tariff scenario.

Last week, China announced that it was preparing to retaliate in the escalating trade war with tariffs on about $60 billion worth of US goods. The import tariffs would range in rates from 5% to 25%.

In addition, the mix of products this would impact has moved on from mainly agricultural goods to new products such as liquefied natural gas (LNG) and some aircraft, for example. This is significant, as China is a growing player and potentially a big customer for US LNG exports. And this is not just with companies such as Cheniere Energy, which has an export terminal in the Gulf of Mexico, but also to new US gas sources from Alaska.

In a rather measured message – compared to some of those released by President Trump of late, China's Ministry of Commerce said: "The implementation date of the taxation measures will be subject to the actions of the US, and China reserves the right to continue to introduce other countermeasures. Any unilateral threat or blackmail will only lead to intensification of conflicts and damage to the interests of all parties.”

The Chinese move is in response to Trump’s announcement that the US is considering raising tariffs after 5 September on a further $200 billion of Chinese goods from 10% to 25%, as mentioned previously in this blog.

China has now either imposed or proposed tariffs on $110 billion of US goods. Last year, China imported approximately $130 billion of goods from the US. On the goods tariffs front, there is very little left for China to play with.

Speaking about the trade war with China on Fox Business News US last Thursday, US commerce secretary, Wilbur Ross, said: “We have to create a situation where it’s more painful for them to continue their bad practices than it is to reform.”

Last Friday, on the fringe of an ASEAN meeting in Singapore Chinese state councillor Wang Yi told reporters: “Cooperation is the only correct choice for the United States and China. It’s the universal expectation of the international community. Opposition can only bring dual loss and will hurt the peaceful and stable development of the world. We are willing to resolve the concerns of both sides via talks on the basis of an equal footing and mutual respect.”

However, it has always been more than just about pure exports and imports for the US. At the same time, the US administration also wants to see more movement from China beyond the big trade deficit problem and is looking for better protection for US companies’ intellectual property and technology if they are in JVs or production agreements with Chinese counterparts and/or operating in China. In addition, the level of cheap loans that Chinese companies can obtain from entities such as China Exim and China Development Bank is another major area that the White House is particularly concerned about.

Of course, these are not new claims by the US by any means. Achieving a level-playing field on the loan front and financial support is never going to happen, but it would seem that the Trump administration wants to throw it into the mix anyway. Many would argue, why not?

The problem for China probably lies in the fact that if it gives in on one issue, it sees a very bullish US president consistently pressing on more issues. It’s a hard ball game that Trump thinks he can win – and is prepared to continue to play despite the global economic fallout and threat to global stability.

The IMF has warned that an escalation of the US-China trade dispute could pose risks for the global economy. And the Bank of England said last Thursday that protectionist trade policies were beginning to have an adverse impact, most notably on indicators of global goods trade. And many observers say that growth in factory output has begun slowing across advanced economies.

What is clear is that there is certainly a slowdown in Chinese economic performance. This is probably due to a range of cooling factors and not simply an impact of the trade wars and increasing uncertainty. The Chinese government has responded by releasing more liquidity into the banking system, encouraging lending and promising a more active fiscal policy. However, the Chinese stock market has been impacted heavily.

Chinese media (presumably prompted by Beijing) has started to hit back at US government statements. This Monday the China Daily stated that China’s stock market was performing poorly before the US administration had imposed tariffs, asserting that the downturn was partly due to Beijing’s attempts to cut corporate debt.

The drop in the Chinese stock market prompted President Trump to jump in on the trade war front with China on Saturday, tweeting: “Tariffs are working far better than anyone ever anticipated. China market has dropped 27% in last 4 months, and they are talking to us. Our market is stronger than ever and will go up dramatically when these horrible Trade Deals are successfully renegotiated.”

In a response to this on Monday, the overseas edition of the China Communist Party’s People’s Daily newspaper singled out Trump, saying he was staring at his own “street fighter-style deceitful drama of extortion and intimidation”.

With all this going on, there has also been much talk about the fall in the value of Chinese yuan (renminbi). But this has largely been controlled by Beijing. By the end of last week, the renminbi had completed its eighth weekly decline, and overall had fallen almost 9% since mid-April. In theory it could help Chinese exporters manage the impact of higher US import tariffs. However, this is a difficult game to play, and could push some investors to withdraw money from the country. The government says it is not driving the currency down to gain a trade advantage, and there is some evidence that Beijing has become uncomfortable with the pace of renminbi depreciation and is taking steps to stabilise the currency.

For TXF Essentials Subscribers Only:

Foreign policy: The balance of trade power
TXF assessed the current state of foreign policies around the world at TXF Global in Prague last month, and the biggest geopolitical variables facing the project and export finance community today.

Trade wars: Cash for traders in a stormy climate?
Jean-Francois Lambert, founder of Lambert Commodities, outlines the potential impact of trade wars and protectionism on commodity trading houses, and how the current geopolitical turmoil could prove to be a boon for savvy traders.

Illuminating the hurdles to solar energy
TXF Global assessed the biggest challenges faced by the solar energy industry earlier this summer at the largest export finance gathering in the industry.

Super-Sinosure: Pushing the cover boundaries
Sinosure wants to up its short and long-term export credit insurance exposures to over $450 billion by 2020 and is targeting international lenders for far more business. However, the brewing US-China trade war and concerns over how projects apply capital under the Belt & Road Initiative are casting shadows over the Chinese ECA’s ambitious target.

TXF’s top lending opportunities this week
TXF Data has been capturing the top business opportunities across 70 of the most active ECA exporters on a weekly basis so you don’t have to.

TXF's latest CIRR trends tracking
TXF Data’s latest weekly tool tracks the yields of relevant sovereign bonds to forecast whether there will be a rise or fall in CIRR rates – the minimum interest rate an OECD ECA can charge for direct loans.

Not on the net:

UKEF closes first Airbus deal since 2015
UKEF has completed its first transaction in support of Airbus since the agency closed its doors to the manufacturer in 2016. UKEF is providing up to a maximum of…

Tight pricing for Wilmar's latest $1.8bn syndicated loan
Singapore-based agribusiness Wilmar International got tight pricing on the back of strong appetite for its recent $1.8 billion loan. The deal was upped to $1.8 billion, from an initial $1.5 billion at launch in May, following…

ACWA comes in lowest for Kom Ombo solar
Egyptian Electricity Transmission Company (EETC) has received multiple offers for the 200MW Kom Ombo solar PV project. Bids were initially due at the beginning of April but…

ING Lease funding Kristal Solar Park project
Construction on the 99MWp Kristal Solar Park in the Benelux will start in October following financial close on around €60 million ($69.6 million) of project debt from ING Lease. Sponsored by…

Well, that’s all for now folks. Please do drop us a line if you have any news and want to broadcast something, or if you have any suggestions/feedback on the editorial front.