“However difficult life may seem, there is always something you can do and succeed at.”

This quote by world-renowned English theoretical physicist and cosmologist, Stephen Hawking, is an apt reminder that even during times of stress and uncertainty, decisions can be made, and actions can be taken, to ensure success.

This is a particularly appropriate sentiment for the export finance industry, a relatively small, but crucially important, part of the global economy.

For the export finance banks and ECAs over the past 12 to 18 months, difficult decisions were made to ensure the survival of their borrowers. This is no better demonstrated than by the near $17 billion worth of Covid-19 relief support that the ECAs provided to their national exporters throughout 2020. This financial support has been vital to much of the industry surviving the short, albeit very sharp, liquidity crisis and working capital challenges precipitated by international travel bans and national lockdowns.

While success is a relative term that can be defined against a number of different metrics, the TXF Global Export Finance Industry Report 2021 (available here) and TXF Data show that the export finance industry weathered the Covid-19 storm well, with major projects still going ahead across all regions, accompanied by a fairly positive sense of optimism for the future.

Of course, there have been some casualties, and this was always going to be unavoidable, but the relatively strong position that the industry finds itself in today is, from TXF’s perspective, a strong sign of success.

To recognise this success and the hard work put in behind the scenes across the export finance banks and ECAs, TXF held our first virtual Export Finance Industry Awards ceremony on the 14 April.

These awards were developed based on the banking and ECA heatmaps produced in TXF Research’s Global Export Finance Industry Report 2021.

The heatmaps are an empirically driven piece of analysis that amalgamates the views and experiences of the exporters and buyers that engage with the banks and ECAs. This is the only place in the industry where you can find out how the banks and ECAs compare against one another, based on what their own clients think of them.

Caption 1 shows the redacted banking heatmap. Exporters and buyers rated the banks they engaged with across six different attributes on a scale of one to five. These attributes were decided upon in consultation with several key banks and ECAs prior to the survey going out.

No duplicate data went into the heatmap. If we received more than one score by the same institution, the data was aggregated and averaged to produce a single response for the company. This ensured that there was no bias or skew in favour of some of the larger corporates and buyers where we received multiple responses.

For those of you with quick mathematical brains, you will have recognised that there are thousands of discrete data points that have gone into making up the heatmap and, therefore, the awards that were developed from the heatmap.

The same methodology was applied for the ECA heatmap.

After the heatmaps were developed, the award categories were decided upon following extensive discussions within TXF. We wanted to develop awards that were most befitting of the current state of the export finance industry, which is why we settled on the following:

6. Understanding of their clients’ business

For those of you who were not able to attend, here are a list of the banking and ECA awards winners: 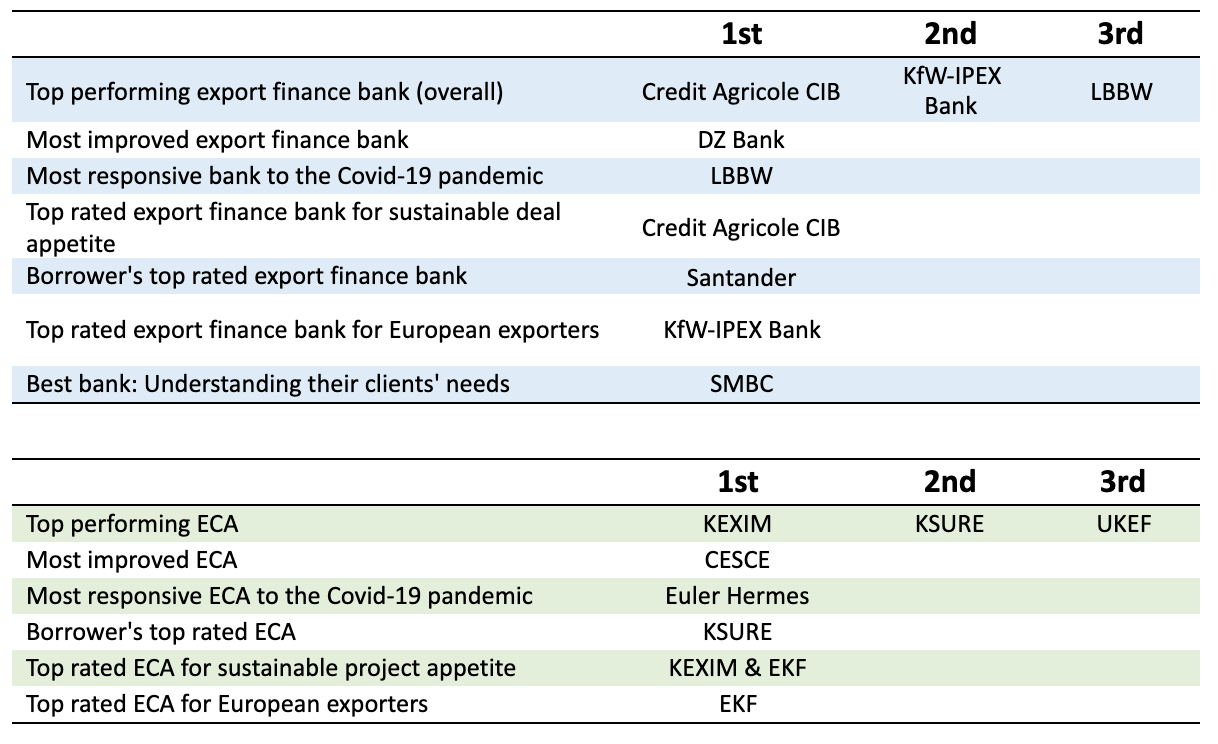 For those that missed it or if you would like to watch the ceremony back, you can do so here on our industry-leading platform, Kujenga.

I think I speak for everyone at TXF when I say that while the awards were a great success, we hope that it will be our first and last virtual awards ceremony. These things always work best in the world of the physical, and we hope that next year, and for many years to come, we can continue to celebrate the success stories that come out of the export finance industry.

For anyone wanting more information on the report or the heatmaps used to develop the awards, please feel free to reach out to myself, or to anyone at TXF. We would love to hear from you.