One of the biggest challenges small farmers face when they try to access finance is that they are an unknown risk. More farmers in African, Caribbean and Pacific countries have a mobile phone than a bank account, and even when they have tapped credit, it tends to be in a non-traditional form that passes through the net of mainstream credit data collection. 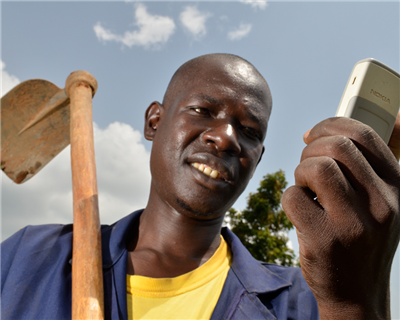 One of the biggest challenges small farmers face when they try to access finance is that they are an unknown risk. More farmers in African, Caribbean and Pacific countries have a mobile phone than a bank account, and even when they have tapped credit, it tends to be in a non-traditional form that passes through the net of mainstream credit data collection.

This is changing. Internet start-ups, credit bureaus and even development projects are using new technology to help smallholders create their own ‘credit’ history, or at least a clearer picture of who they are and how well they run their businesses. With the collection and sharing of everything from utility and mobile phone bills to records of input purchases and crop yields, farmers are finally gaining a financial identity – and one that banks or MFIs are increasingly prepared to lend against.

“A big part of the problem of giving credit to smallholder farmers is that their economic life is informal,” notes Spencer Morley, implementation manager at Farmforce. “There’s basically no formal record of what they’re doing.” And without the ability to make a credit assessment, banks and other financiers are reluctant to lend.

Where Farmforce steps in is by offering a mobile web system that helps more than 16 contract farming schemes in Guatemala, the Philippines and sub-Saharan Africa improve their management and record keeping.

Field agents employed by the schemes use an Android mobile app on their visits to smallholder suppliers to record everything from the quantity and frequency of pesticide application to how much crop a farmer ultimately produces from how much seed.

The creation of real-time records that are geo-specific and are automatically relayed back to head office means schemes can ensure that their produce complies with export market requirements and that they are alerted immediately to potential inefficiencies and other risks like fraud or side-selling.

But that isn’t the only benefit. Records like this give lenders confidence, even in the absence of traditional credit data.

All the banks that Farmforce has spoken to since its launch in 202 say that “as soon as they have three seasons of verified, time-stamped, geo-tracked agricultural production data, they’re happy to lend the money,” says Morley.

For some produce such as French beans in Kenya, that three-crop history could be available as early as next year.

“One of the biggest things holding back agriculture in many developing countries is access to finance,” says Shane Moldenhauer at Creditinfo, a credit information and credit risk management solutions provider. “They’re completely out of the financial grid – they’re unbanked.”

Creditinfo helps address this by gathering non-traditional data – ranging from company invoices and bills to registrar data – to build a bigger picture of individual farmers and the companies they supply. It then sells that data to banks and microfinance institutions (MFIs) and also works to educate farmers on ways they can improve their ability to borrow.

In the five years since Creditinfo entered Georgia, financial inclusion in the 15 to 70 age range has grown from 800,000 people to 1.7 million.

It aims to replicate this success in Ja- maica and Guyana, where it launched last year. In Africa, it already has operations in Tanzania and Cape Verde and – through a joint venture formed this February with biometrics company VoLo – in Gambia and Senegal.

The company’s near-term target is to double the number of countries it operates in, with many of those new markets likely to be in Africa and the Caribbean, Moldenhauer says.

Formed this year by a group of students at Nairobi’s School of Computing and Informatics, FarmDrive will use data it gathers on smallholder farmers to connect them with investors via a new web and mobile platform.

To qualify for a traditional loan, a farmer needs to produce at least three months of records, detailing their input costs, output and earnings, says co-founder Peris Bosire. However, most don’t keep precise records and many are not even aware that doing so could help them access finance. This “locks out farmers,” she says.

Under the system, smallholders log details of everything they spend, produce, own and earn on a mobile app. FarmDrive uses this data to create a profile of the farmer, outlining where he is located, what he produces, how successful he is, how much money he needs and what he plans to do with it. This builds a picture that investors can use to determine the potential risk and return attached to a smallholder, says Bosire. Essentially, “we recreate the creditworthiness of the farmer”.

Potential investors can search farmers by location and sector and, when they find one they like, can request from FarmDrive more detailed access to his or her financial records. They can also invest in farmer groups who are prepared to guarantee each other’s loans. Investments can start as small as 3,000 Kenyan shillings ($34).

Fifty farmers across Kenya are so far signed up, and are helping FarmDrive fine tune what methods of data collection work best. It aims to launch in September.

The Association of Kenya Credit Providers (AKCP) also takes a non-traditional approach in its efforts to create a sharable pool of credit data that will give banks and other lenders more confidence to lend to farmers and other individuals.

Over the next 12 months AKCP will also enable savings and credit cooperatives (SACCOs) to participate and will work to enrol non-traditional lenders like utilities and solar light providers, which will be able to provide data as simple as whether a smallholder farmer pays his electricity bill.

“Agricultural borrowers will be an important beneficiary of this,” says Getenga.

Mobile technology is transforming the lives of small farmers. With smartphone penetration sweeping across Africa, producers can already access everything from current commodity prices to weather forecasts, book-keeping services and technical advice from their handset.

Mobile banking services like M-Pesa allow farmers to carry out safe, cash-free banking and access small loans from MFIs like Musoni. Ventura Associates, for example, aims to have two million farmers connected by the end of this year to a banking platform it is launching in Mali.

Mobile banking already means that claims against some Syngenta Foundation crop insurance products can be paid out within days.

And from August 2014, an e-Bay style digital trading house called Agrocentral will even put farmers in Jamaica in direct contact with potential buyers, all via their mobile phone.